This method was established by Jacob Levy Moreno, 1889 – 1974. He was a doctor, psychiatrist, sociologist and the founder of psychodrama, sociodrama, sociometry and group psychotherapy.

His approach might be considered as being „beyond Sigmund Freud“. In which way? In his autobiography, Moreno reminds an encounter with him in 1912. “I attended one of Freud’s lectures. He had just finished an analysis of a telepathic dream. As the students filed out, he singled me out from the crowd and asked me what I was doing. I responded, ‘Well, Dr. Freud, I start where you leave off. You meet people in the artificial setting of your office. I meet them on the street and in their homes, in their natural surroundings. You analyze their dreams. I give them the courage to dream again. You analyze and tear them apart. I let them act out their conflicting roles and help them to put the parts back together again.'” (Source)

Thus, the focus is on humans but less as individuals than within groups and social contexts in which individuals act. With today’s words, we could say that Moreno’s intention was empowering people through drama.

In the early 1900s, when Moreno lived in Vienna, he inaugurated the Theatre of Spontaneity, an improvisional theater (in German „Stegreiftheater“). By doing this, he developed psychodrama which is ‘beyond psychoanalysis’ and a way to stimulate people’s energy of creative and spontanous expressing and acting.

Sociodrama takes places when it comes to issues and conflicts of the whole society. For example, social problems like housing and raising rents, the right-wing movements and parties in Europe, the „troubble“ around the Euro, democracy and how to participate, but also bullying, racism against refugees, etc. Participants play a situation and try to ‘go in the shoes’ of one’s other. They experience new perspectives. This stimulates a deeper understanding of community’s and society’s issues. Acting through Sociodrama gives also the opportunity to discover new possibilities to talk and act.

During the project’s workshop, we got to know SOCIOMETRY as a group picture on Europe. Find here the description of the exercise in detail.

The SOCIODRAMA session was dedicated to a  „good life in a good Europe“. Find here methodological suggestions for trainers and participants. 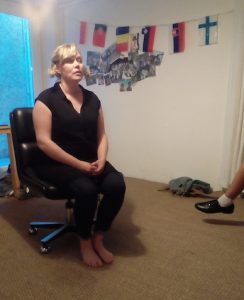 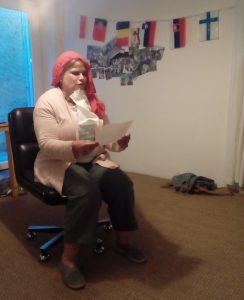